Due to the COVID-19 pandemic, the discussion was moved to zoom video conference (watch video) and the content was adjusted to reflect real-time economic forecasts for our nation and state as well as a discussion of what that means for our local business community.

While the situation is changing daily, Dr. Walden believes we are already in a recession and that we will likely see substantial declines in economic output (5 to 25% decline in GDP) and increases in unemployment for two quarters - bringing an end to the longest boom this economy’s ever seen. He estimates the recovery will not begin until 4Q20 and unemployment will not return to traditional levels until mid-2021.

Dr. Walden explained the scale of this crisis is far too large for any local or state government to deal with adequately and that response must come from the federal level. He praised the recent national fiscal and monetary moves, including the congressional relief package – the largest in our history - that will likely go to the President’s desk before the end of the week, and the Federal Reserve stepping-up with $4 trillion in assistance. According to Dr. Walden, these unprecedented moves by the President, Congress, and the Federal Reserve are like “putting out a fire” and signal an awareness to the high level of crisis.

As far as when we move to recovery, Dr. Walden discussed the “V” shaped recovery curve (sharp economic decline followed by rapid rise) versus the “U” shaped recovery curve (more prolonged economic decline followed by a gradual rise given shaken confidence). President Trump believes we will see a “V-curve” and says “when… this hidden scourge is defeated, I think we’re going to go up very rapidly, our economy, and get back to where it was and beyond.” Dr. Walden is optimistic for a V curve and encouraged the business participants to hope for a V and plan for a U. Dr. Walden does not anticipate rising inflation and affirmed our traditionally strong local economy and region.

A candid conversation among 100+ local business owners and managers followed, with questions ranging from the level of corporate debt, amount of cash at banks, and status of the local agricultural and food systems – to - small business loans and mid-size business supports.

Dr. Walden acknowledged some additional potential outcomes from this crisis, including remote work or telework becoming the norm and perhaps more people choosing to live in less dense areas.

*Listen to Dr. Walden and Aaron Nelson's on-air interview with 97.9 The Hill WCHL and read the follow-up article on Chapelboro.com.

Today’s event is part of the 2020 Policy Series, which includes five policy forums featuring influential guest speaker(s) who address timely topics related to the economy, economic development, public policy, and local elections. The series is coordinated by the Chamber's Government Affairs Committee and sponsored by Durham Tech, Duke Energy, and Silverspot Cinema. The next forum is the Regional Economic Development Forum " presented by RTP Foundation and currently scheduled for Wednesday, June 24, 2020 (subject to change). 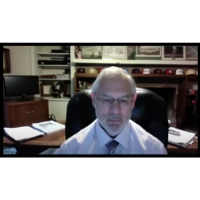