The Steering Committee is a diverse group of community leaders, including Mayors and business owners, community activists and artists, and civic and social leaders.

As part of today’s announcement, the Steering Committee called on every community member to submit their biggest, boldest idea that will help make our community an ideal place to live, work, and launch and grow a business.

A Big Bold Idea is an idea that 1) will have a lasting and positive impact on our community, 2) is ambitious, measurable and accomplishable, and 3) is something you are willing to work on but cannot accomplish alone. Examples include: “No one in our community goes to bed hungry;” “All children read on grade level by grade three;” “Create 1000 units of affordable housing in the next 10 years;” and “Build 100 miles of greenways and bike trails by 2030.”

This Steering Committee has convened three times to develop the Big Bold Ideas community-wide civic improvement process, which will unfold in three phases:

1) Phase I: Call for Big Bold Ideas. From now until Oct 12 (three weeks), the community is invited to submit their ideas at www.BigBoldIdeas.org or via text at 919-525-1395. The outreach for ideas will include in-person, online, and on-air solicitations from diverse speakers in various languages. The Chamber staff will monitor submissions, cluster ideas into categories, and address any questions.

2) Phase II: Sort and Select Big Bold Ideas. In mid-October, the Steering Committee will share with the community the ideas collected and give everyone a chance to help prioritize the ideas through a web-based, crowd-sorting platform. On November 7, the Steering Committee will host a Community Selection Conference with delegates to narrow down to three Big Bold Ideas. The time and location of the conference is being determined. Those interested in serving as delegate should indicate so when they submit an idea.

3) ​Phase III: The Big Bold Way Forward. After the Big Bold Ideas are selected on Nov 7, the Steering Committee and Chamber staff will perform research and build the business case for each idea as well as identify funders and co-champions. The implementation plans for each Big Bold Idea will be announced and discussed at The Chamber’s Annual Meeting on January 31, 2020.

“Greater Chapel Hill-Carrboro has realized some remarkable improvements in community well-being over the last decade. Now it’s time for some big ideas and bold action so everyone in our community can thrive in the future,” said Nelson.

Today’s Big Bold Ideas announcements, including the introduction of the Steering Committee and call for Big Bold Ideas, took place during The Chamber’s State of the Community Report at the Friday Center in Chapel Hill with nearly 400 guests in attendance. Big Bold Ideas was originally introduced to the community during The Chamber’s 2019 Annual Meeting at the Carolina Club on February 1, 2019. The inspiration for Big Bold Ideas came from the "Big 5 Initiatives" in Kansas City, where the Greater Kansas City Chamber of Commerce initiated and continues to lead a similar process for their region. Big Bold Ideas was made possible through the financial support of Atma Hotel Group, Bank of America, Bold Construction, Coastal Credit Union, and East West Partners. 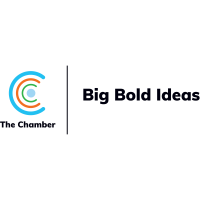